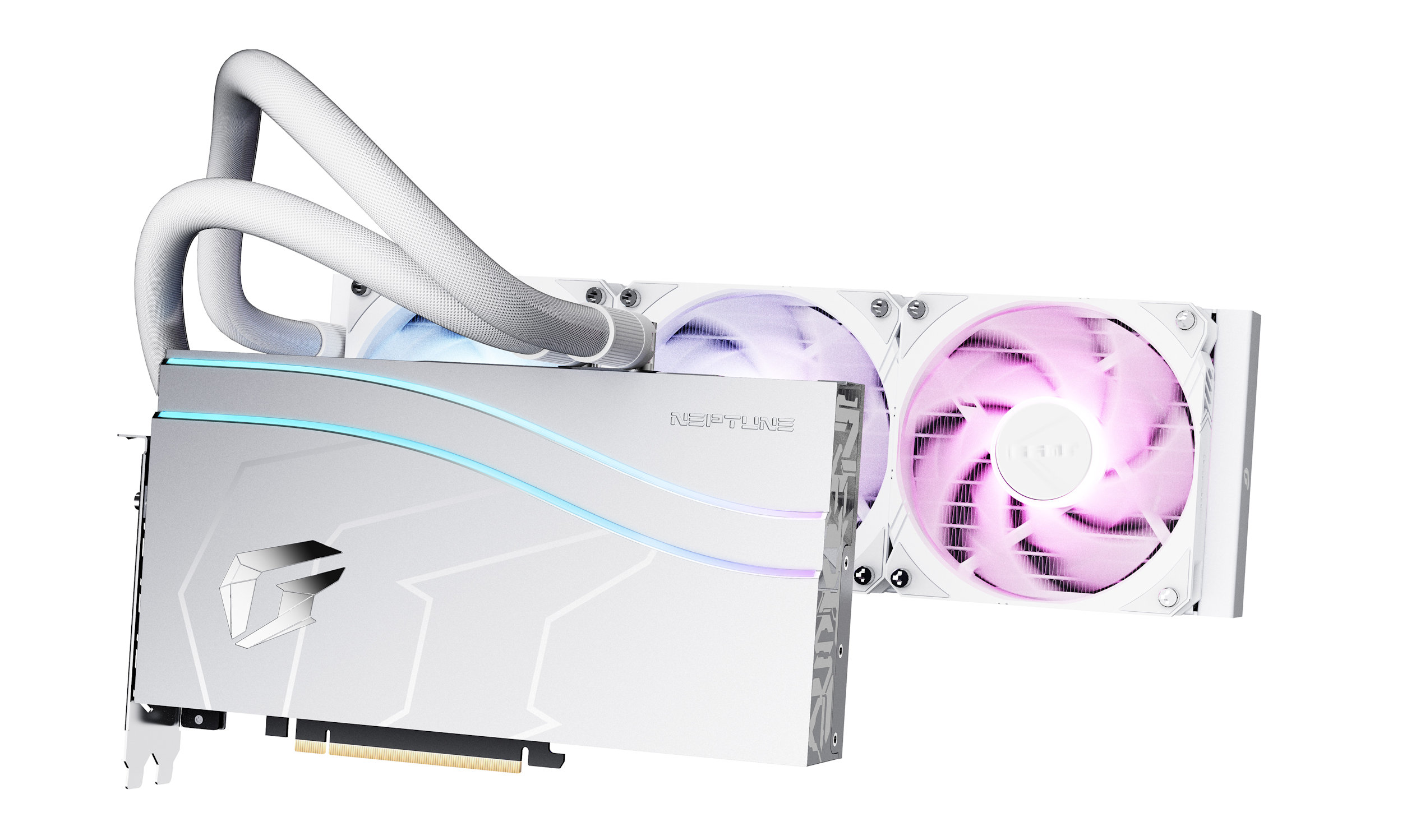 The Lovelace GPU series is finally here! Nvidia has finally shown us the goods, revealing the RTX 4090 and two versions of the RTX 4080 at this year’s GTC event, and now we’re getting a taste of all the variants offered by third-party GPU makers such as MSI, Asus, Zotac, and many more.

So, to get in the Team Green spirit, we’re going to do a little round-up of a few new eye-catching variants from the aforementioned manufacturers, as well as what to expect in the coming months. We’ll discuss the significant changes these companies have made to meet the no doubt intense needs the RTX 4000 series has, and what this might mean for us as launch dates are released.

Before we do our deep dive there is one particular model we’d like to talk about first. This is a personal favorite on our list and it’s a pretty easy guess as to why.

The promotional photos showcase the new system with pink, blue and purple lighting on the fans, creating an aesthetic that is often associated with female gamers. Women have been making ourselves known in the community for a long time, creating really colorful and impressive PC builds, streaming, and commenting on the state of the gaming industry, which I love to see! I personally love this version of the RTX 4000 series, and think it’s incredibly cute, but it does immediately bring a terrifying thought to mind: the pink tax.

The pink tax is the – unfortunately common – phenomenon in which items that are designed for women (or that don’t meet the conventional dark and angular designs of traditional male-targeted product aesthetics) cost significantly more, even if they serve the exact same function or have the same specifications. While the Neptune series is not itself explicitly marketed towards women, it’s a very impressive bit of kit that will likely be very appealing to a female audience. The white and pink aesthetic is very heavily associated with women who game, and seeing the aesthetic in the world of already-pricey GPUs does make the wallet twitch a little bit.

We don’t have release dates or pricing information for these third-party cards as of yet, but there is the worry that an already pricy piece of equipment may be even more expensive for certain audiences.

The pink tax discussion has crept into the world of gaming very recently with the Logitech Aurora collection. The collection showcased fun-colored keyboards, mice, and accessories that were intended to reach out to the female gaming market, with further add-ons to be purchased for a more customizable experience.

The only issue with this is the fact that Logitech handed this to female gamers with the pink tax bundled in. The Verge (opens in new tab) notes that most of the products available in the collection have significantly less battery life or very similar looks and specifications as the less colorful headsets and mice offered by Logitech, but at more expensive prices.

The inaccessible prices that the Aurora collection boasts as being ‘gender inclusive’ just demonstrate the point that companies are aware of the issue and feel comfortable continuing to charge certain groups of the community more for essentially the same product. There is no logical reason a bit of pink or lilac should run you nearly $50 more.

We are not levying the pink tax accusation specifically against Colorful and the new iGame GeForce RTX 4000 series graphics cards, only pointing out a common problem that creeps up on consumers in most markets. Seeing a product with ‘feminine’ colors or designs does ring little alarms in our minds, and we hope that by bringing this to light we may be able to help gamers make more informed choices.

MSI has unveiled its take on the GeForce RTX 4090 and RTX 4080 series and it’s very pretty. The new line of graphics cards from MSI seem to focus on improving and redesigning their cooling systems, a move that makes a lot of sense when we consider how powerful (and in turn how hot) the RTX 4090 and RTX 4080 are going to be.

The models we’ll be seeing from MSI are the Suprim, the Suprim Liquid, the Gaming Trio and Ventus.

The Suprim graphics cards are all about performance, efficiency, and prestige. The new and advanced cooling system, Tri Frozr 3s, is fitted with TORX Fans 5.0, 10 Core heat pipes, and airflow control fins that promise to maximize performance while keeping the GPU temperature cool.  The RTX 4090 and RTX 4080 16GB models will have a vapor chamber as well, while the RTX 4080 12G model will boast a massive nickel coated copper baseplate.  The Suprim will be fitted with RGB Mystic Light with customizable lighting options and users will be able to quickly switch between low noise or additional performance settings. The RTX 4090 model will take up 3.75 slots and the RTX 4080 models will take up 3.75 and 3.5 slots respectively. That’s a lot of space to give up, so consider this your warning, fellow small PC users.

This generation will also be introducing the Suprim Liquid series, which will utilize a connected closed-loop liquid cooling system to keep temperatures low and performance high. MSI Silent Gale P12 fans provide massive air pressure, and the TORX 5.0 fan situated at the top of the heatsink promises even more cooling at peak performance. This model is only available for the RTX 4090.

We see a familiar look with the Gaming Trio, with just a few updates, such as the iconic three fans, which focus airflow into the improved Tri Frozr 3 cooling system. This model also hosts a nickel-plated copper baseplate and has RGB LEDs that work with MSI’s Mystic Light Sync and Ambient Link software to hopefully create a customizable and colorful experience. The graphics card will take up 3.75 slots for the RTX 4090 model and 3.25 slots for the RTX 4080.

This model continues its no-frills design philosophy. The Ventus is thin and has an improved cooling system, reinforced aluminum backplate, and a simple but satisfying aesthetic that will fit into any build. It’s quite a practical design that seems to do what it says on the box. This one runs a little slimmer than its siblings, coming in at 3 and 2.5 slots for the 4090 and 4080 respectively.

Release dates for all of the above models are yet to be released by MSI, though we suspect we might be seeing the series around the end of October or early November, to coincide with the launch of Nvidia’s stock GPUs.

Asus is in on the action, releasing GPUs in its ROG Strix and TUF Gaming lineups, featuring  rather rugged variants of the GeForce RTX 40 series and we’re here for it! The designs for the new models are industrial and chic and once again put a great emphasis on better, newer cooling techniques.

Asus claims to have designed this graphics card with refresh rates and higher resolution in mind, and we can see aspects of that sentiment in these graphics cards. The new ultra-rigid 3.5 slot die-cast frame has been designed to prevent sagging and warping while allowing for uninterrupted airflow, which is quite the balancing act for a graphics card that’s so compact yet powerful. The rebuilt heatsink and upgraded Axial tech fans promise a 24% increase in airflow than the previous ROG RTX 3090, which would be impressive if true.

The TUF gaming cards are not very different from the ROG Strix models from what we know so far, aside from a slightly thinner body and ARGB lighting that works with Aura Sync. There is a massive vent at the edge of the backplate and a new vapor chamber to help with cooling. This is shaping up to be quite a large graphics card, something to keep in mind if you have a small or compact PC.

The design choice Zotac has made with its version of the GeForce RTX 40 series is a personal favorite of some of our team members. Each of the three models has a very interesting, squoval (look it up) design that works really well with the RGB setup and overall vibe Zotac is trying to go for. We will be seeing three variants: AMP Extreme AIRO, Trinity, and Trinity OC.

This is the new flagship model, designed for “gamers and enthusiasts who desire ultimate performance” in mind, according to Zotac. The new ‘Air Optimized’ design features counter-rotating fans and all-around RGB lighting in the die-cast metal backplate.

The AMP Extreme Airo features the IceStorm 3.0 Advanced cooling system, which mounts three large fans that are twice the height and blade width of their previous generation. The vapor chamber is paired with nine composite copper heat pipes, which are bigger than those seen in some other models. The funky new design allows waste heat to escape more freely through ventilation paths.

The Trinity and Trinity OC models utilize the same IceStorm 3.0 Advanced Cooling system as the AMP Extreme Airo, as well as Active fan control and a sturdy metal backplate.  Both Trinity models have SPECTRA 2.0 RGB lighting and have a new Firestorm Utility feature that comes to us with more options and controls like clock speed, fan speed, fan curve settings, and more. The design is similar in shape to Zotac’s flagship, but a little less flashy overall.

All in all, we have a large variety of GPU designs to choose from in the coming months, all with different aesthetics and specifications to meet a variety of needs. Many third-party manufacturers have risen to the challenge the Nvidia GeForce RTX 4000 series presents, trying to cope with the power and performance the graphics card can achieve.

The 4000 series will be giving us graphics processing power as we have never seen before, and it’s obvious from the new variants we may be seeing around October 2022 that manufacturing companies have had to step up their game to match the obvious excitement PC gamers have around the new cards. Meanwhile, the RTX 3000 series GPUs are already having significant price cuts and may continue to do so as we get closer to release dates, so this is the perfect time to grab one if you’ve been holding out.

With cheaper prices for a (now) more accessible GPU, the RTX 4000 series may not have as many eager buyers as expected. Most people won’t need the type of performance output the RTX 4000 series provides, so buying any of the models in the RTX 3000 series may be a great idea if you want great performance for a much cheaper price. Up until the announcement of the RTX 3000 series, particularly the RTX 3090 Ti, were the best on the market, and now that those cards are significantly cheaper this is the perfect opportunity to experience that level of performance without breaking the bank.

Most of the models we looked at are set to take up a fair few slots in any PC case they are installed in, and are very, very big and heavy. They all seem to be focused on improved cooling solutions and that could be a nod to how hot the RTX 4000 series will run. So basically: be prepared to make some space in your rig’s chassis!