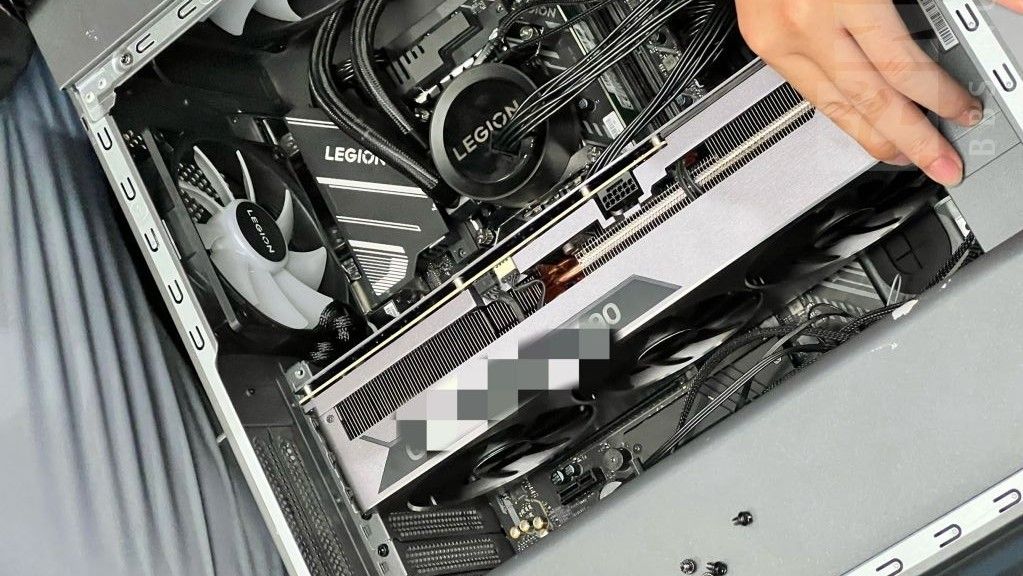 Below you will find the latest news of New Nvidia RTX 4090 GPU spotted from an unlikely source
which was published and made available by Tech Radar . Find the latest Computer News on our section . All news posted here are for information purpose and to let you know the consumer whats going on around the tech industry. All information news technology is brought to you by Thirty5Tech a New York City computer repair service provider. If you like the news below, Feel free to visit the source of the link for more information or to continue reading New Nvidia RTX 4090 GPU spotted from an unlikely source from their main source.

As Nvidia’s RTX 4000 GPU reveal presentation on September 20 looms, the leaks just keep coming. Like water through a sieve, yet another RTX 4090 has been sighted, this time by Twitter user @wxnod.

The images provided feature some not-so-subtle pixelation, but this is pretty clearly Lenovo’s own Legion-branded take on the GeForce RTX 4090. As expected from other leaks, it’s a seriously chunky GPU; three fans and a thick, quad-slot design that only just fits inside the pictured case.

This RTX 4090 appears to be powered by a single 12-pin power connector. The leaker later added images of the GPU heatsink, a huge block of metal that appears to feature a whopping 13 heat pipes. It’s unsurprising that the sheer power of the RTX 4090 will demand a lot of cooling, but this looks like a heavy, bulky card.

Analysis: Could Lenovo be planning to break into the discrete GPU game?

Lenovo has obviously sold GPUs in the past, but these have only been modified Nvidia and AMD cards found in Lenovo’s pre-built desktop PCs and laptops. The ‘graphics cards’ section of Lenovo’s own website (opens in new tab) mostly just features workstation-grade compact GPUs for upgrading Lenovo’s ThinkCentre and ThinkStation systems.

If Lenovo is actually making its own GPUs, we could be in for a treat. A new entry to the third-party graphics card market is always a good thing, serving to drive competition and innovation within the sector. We could also look forward to superior performance from Lenovo’s own pre-built desktop PCs, if this is the case.

Of course, there’s always a chance that this is a different RTX 4090 that wasn’t made specifically by Lenovo. Although the card is surrounded by clearly Lenovo Legion-branded components, it’s impossible to tell if there is any Legion branding on the GPU itself. And while the color scheme does match, that’s not really proof, so take this leak with an appropriate serving of salt.

There’s also a chance that this could be a limited edition card produced to drive Lenovo’s desktop PC sales in the wake of the RTX 4000 launch. There’s no indication that we’ll see any other new cards from Lenovo, such as the expected RTX 4080.

Regardless, we’re eagerly awaiting the arrival of Nvidia’s new GPUs. You can check out everything we know so far right here, and if you’re strapped for cash then this new series launch could provide some succor; RTX 3000 series pricing is dropping, and those current-gen cards will probably get even cheaper once RTX 4000 goes on sale. In any case, you can check out our favorite graphics card deals while you wait.